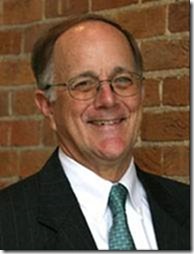 During late May/early June 2019, I had the great fortune to represent Hope Family Village by attending the Annual National Cohousing Conference in Portland, Oregon.  I was accompanied by another Williamsburg area volunteer, Shannon Casey, who is a brilliant Green Housing designer/developer and fully committed to caring for fellow humans suffering various neuro-diversity issues.  The conference program was rich in both content and subject matter experts, so for optimal learning leverage, with two exceptions, we gladly split our schedules.

As my travel schedule worked out, I arrived a bit ahead of the formal conference and was just in time to attend an optional pre-conference “Intensive” Program, spending the afternoon with nationally known architect and cohousing expert Grace Kim to explore Common House Design.  This was a powerful presentation as were the accompanying resource materials I gathered.

The Common House is a distinctive feature of cohousing that separates its “Intentional” communities from most other models. It is a central theme of our plans for Hope Family Village, a community envisioned for approximately 25 households with at least one member suffering from Severe Mental Illness and their family caretakers.  Of note is that the leading recommendation of a College of William & Mary Entrepreneurship Study Team charged with investigating the HFV business plan/model was to design and build the Common House before building the remainder of the village.  The key takeaway from Grace Kim’s session was that special needs neighborhood-housing design requires particularly careful attention.  That message ricocheted throughout the conference in other sessions.

As part of my registration package, I had chosen another pre-conference “Intensive” session the following day.  This was to spend that afternoon touring three cohousing communities in East Portland, across the Willamette River.  In my opinion, the conference organizers did a great job choosing projects that were widely diverse and finding communities that were proud to show themselves to the cohousing world. Having residents at each property make the introductory presentations and lead the small breakout tour groups was also a masterstroke.  For me, it was an intensive and highly useful introduction to the real world of cohousing.  The comments that follow are a combination of my notes and a reworking and occasional direct presentation of information from the respective web sites that my observations confirmed.

The properties visited were: 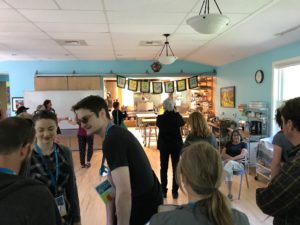 The Community:  This is a multi-generational community in the Cully neighborhood of Northeast Portland.  To me it is more suburban than urban.  From the introductory remarks and the website, its creation appears to have been more developer than resident driven.  Essentially, a 1970’s apartment complex was taken over and merged with some adjacent and actively managed farmland.  Properties were rehabbed and a Common House constructed.  The transaction occurred in 2007; Groundbreaking followed in 2008; and in 2009, the first residents moved in. 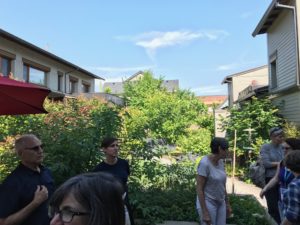 There are 37 homes in five buildings at the south end of a 3.73-acre property. Further back on the property is a 1912 farmhouse, where there are guest rooms, a children’s room, meditation room, media room, kitchen, freezers, root cellar and living and dining rooms used for meetings and social events. Nearby is a majestic black walnut tree that is more than 200 years old.  Other shared “common space” on the property includes a dining/common hall with play room, a crafts/sewing room, workshop, laundry room, storage building, and tool shed.  An interesting fact is that the 37 residences require only 3 sets of washers/dryers to handle the community-washing load.  This leaves room in the individual living units for other amenities.

I was impressed by the village’s commitment to gardening.  Food is grown in two large gardens and used for scheduled and optional community meals in the Common House. It was reported that the cost of their fabulous dinners is $5/person. The residents harvest a substantial bounty from fruit and nut trees as well as rows of grapes, blackberries, raspberries and more. Members may also have an individual or shared garden plot and many also use their green thumbs beautifying the courtyard areas in front of their homes.

At this stage of my report, it is useful to briefly reintroduce cohousing.  It came to this country from Denmark in the mid-1980s.   At the conference we learned there are more than 175 established and forming cohousing communities in the U.S., and it is clear there is a lot of activity in the Portland area.

Common cohousing features include the following:

Cohousing communities are often managed by the owner/residents in a manner similar to condominium associations around the country.  This is often through having a Board of Directors elected by the residents/owners govern and implement activities through its Bylaws authority and a series of committees.

Columbia Eco-Village was proud to announce they used a system adapted from Europe called Sociocracy.  It places a huge incentive on developing community consensus.   If one can imagine a Center Circle surrounded by four other circles and all of them linked to the Center Circle, you can visualize the model. 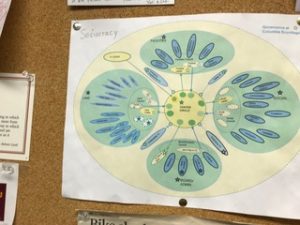 Typically, the four circles are responsible for the following: Land, Facilities, Social Activities and Administration.  The concept is basically a de-centralized governance system, where experts are assigned to each of the circles and have a good degree of autonomy in their domain based on their expertise and experience.  And because it is decentralized, it appears to be more efficient than traditional centrally controlled models.

Wikipedia has an excellent introductory discussion of the concept.  A publication entitled Many Voices One Song written by Ted J. Rau and Jerry Koch-Gonzalez offers an excellent introduction to the subject.  I, for one, am intrigued with the Sociocracy concept and will be researching it further as a potential system of governance that could produce high participation and rock solid consensus building with the future Hope Family Village. 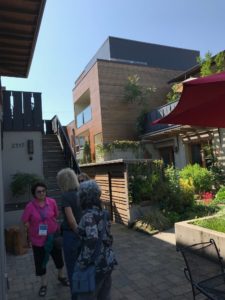 In a stark contrast with Columbia Eco-Village, Ankeny Row represents a superb example of a deeper urban project.  It is well located in the historic Buckman neighborhood near bus routes and a designated bicycle route, thus offering the option of automobile free living.

Built on a footprint of 12,600 square feet (a ¼ acre brownfield lot), Ankeny Row consists of 7 units – 6 for residences and 1 for a Common House, built around a shared courtyard with access through a pronounced pedestrian entrance.  This keeps resident eyes focused on an available streetscape that emphasizes the projects extreme walkability.

The units are contemporary in their architecture with open floor plans that center activity around the kitchen and dining areas.  All units have first floor master suites that permit total living there, if ever required.

Most impressive is the highly insulated Passive House airtight envelope on the buildings that, it is claimed, reduces energy demand by over 90% when compared with conventional construction.  Additional benefits include light filled interiors, excellent indoor air quality through a constant supply of fresh, filtered air, thermal comfort and acoustic isolation from the sound of urban bustle. A solar photoelectric roof top panel that promises Net Zero energy conservation further enhances the project.

During the tour we were introduced to the high technical quality of the installed equipment and the finest of finishes that were used in the construction of these units.  This a very high-end project in terms of value versus median housing costs in the Portland area.  In a book they wrote about the project, the developers make the case that their personal involvement substantially reduced the imbedded project costs for all of the owners.  Rather than charge a developer fee, they contributed their sweat equity to their membership.  This is certainly a powerful project development and marketing idea to keep in mind when starting a cohousing effort.

The Common House was built with top noise containment materials on both the walls and floor. Wonderful art on the walls enhances resident social cohesion.  The space allows for group activities, yoga for instance, other group and community activities and hosted dinners (up to 24 have been served at one sitting).  And the Courtyard Garden and unit decks feature great views, urban gardening and both formal and informal connectivity on a daily basis.  Convenient bike parking emphasizes biking versus visitor driving to the site.

All in all, Ankeny Row is a jewel of a project, one decidedly oriented to well to do seniors who could easily self-fund construction and final living unit acquisition with the existing equity and ultimate sale of their residences.

Our final stop was at PDX Commons.  It is intentionally designated as a Senior Cohousing Community.  At least one person age 55 or older must live in at least 80 percent of the units under Federal Hair Housing Law. They may have children or younger adults living with them. Age restrictions do not apply on the remaining 20 percent of the units.

The owners are acutely aware of the impact that the passage of time will take on its residents/owners and the need to refresh its membership over time.  They are about to celebrate their second anniversary.  A telling sign of the power of their design, development and social plan is that there is a current waiting list of 50 families seeking a home in the complex.