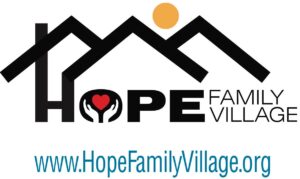 We wish to congratulate Sandy on her role as President of the Board of NAMI Virginia. This is a mature organization of 9 staff members and a new Executive Director. As a member of the Executive Committee and as Board VP, Sandy led critical staff changes in 2019, in taking on a new role as President of NAMI Virginia and playing numerous roles in the mental health arena, resigned as a board member this past year.

The following is my tribute to Sandy, which served as input into a Board Resolution shared with Sandy and her husband Court at our Annual Meeting.

Sandy has been faithful to the concept and realization of Hope Family Village from the beginning of our meeting. Even in resigning for the board, she has believed our project will happen at Eastern State. She kept us moving forward by always pushing for the next thing … consideration of a piece of property, becoming included in mental health conferences, and making her voice heard on our actions and direction as an organization. You need that kind of participation on a board. That will be missed.

In June 2015, at the NAMI Virginia Conference (Richmond, VA), a random encounter with Courtney Mottesheard led a connection with Sandy and 3-hour share session on our mutual concerns and interests, as caregivers, in creating permanent housing and support for those living with a serious mental illness, including our two sons.

Over the course of 9 months (June 2015 – February 2016), Sandy would write or call me about the next step. Urge me to do something. At the time, I did not know what to do beyond bugging Colonial Behavioral Health and our state legislators to take action. We had already introduced NAMI, Department of Behavioral Health and Developmental Services (DBHDS), Colonial Behavioral Health (CBH), NAMI Virginia and our families to Fairweather Lodge (September 2015 – March 2016). With an expectation for the future, I joined Coalition for Community Living (CCL) as an individual member and began attending monthly lodge coordinator calls. Was very involved with our NAMI, teaching the Family to Family Course.

Finally, Sandy, out of frustration, proposed a date and requested I prepare a PSA. I did not know what this was. A Public Service Announcement (PSA) that she would advertise me as a speaker at the Gloucester Library. I had thought 20 minutes of talking and the balance of 2 hours on brainstorming. She said that that would never work. No one attending, she said, would know about Fairweather Lodge or another concept I was mulling over  called Cohousing. She “persuaded” me to talk for an hour, then conduct a brainstorming session.

At this session, the group (24 people), which included housing officials, the head of the Community Services Board for Northern Neck, and NAMI caregivers and peers, participate in a creative thinking, guided exercise that resulted in the concept for Hope Family Village which would serve both caregivers and people living with a mental illness in the same designed neighborhood. We accepted that no one would be taking care of us. We would have to take the action.

In every respect, Sandy was the prime mover. I was the vision guy and could work with a group. But, she organized and communicated with the attendees.

Together we identified 7 families, from our two NAMI Affiliates, who were motivated to talk about creating a cohousing village. We met at the St. Stephens Lutheran Church June 2016. Lee Griffin was one. Jerry Galloway another. They loved the idea, but could not see leaving their homes. Remaining were Sandy and Court, me, Carmen, Allen, and one other Gloucester family.

Everyone was busy with NAMI stuff. (Sandy was facilitating support groups, teaching NAMI’s Family to Family Course in her NAMI Mid-Tidewater Affiliate, and she was also President.  She was a NAMI State Trainer of NAMI Programs.) So we decided to start having dinners like cohousing meals. Keeping us together while we thought about how to make our vision happen. We made a list of people to invite. Our first list. (They were from all over the state.) About that same time, Tom Rideout and I decided to contact Mason (August 2016) to do some independent study work. Flesh out the concept. I reached out to Sandy to tell her about the possible W&M  project and wrote her:

“You got all of us going. I needed the Gloucester library kickstart. I want to tell you more about this week before I write everyone.”

Sandy joined our Pizza Event on this first MBA study and she would followup and participate in the second W&M study as well. All the while, we kept having monthly family dinners. Our preferred placed was in Gloucester: Nick’s Spaghetti  and Steak House. Here our group came up with name for the organization that the MBA students were recommending we create as well as an initial vision statement, which we refined at planning group meetings in the business school on Saturdays. Sandy was a co-founder of Hope Family Village, but did not immediately join our board. As you recall, I knew she was busy with many NAMI and other activities and I wanted to keep it very simple at the start. I thought it terms of 5 people. But Sandy was persistent and wanted to be on our board. She became our 6th member on February 3, 2018.

Sandy participated in both W&M studies and helped organize all the dinners, which moved to Jimmy’s when she and Court moved to Lanexa. She would prompt me each month to write an update on our project, the nonprofit, Fairweather Lodge, and Eastern State. All the while, Sandy would be on the look out for property that would be suitable for Hope Family Village. She found a number of attractive parcels.

We stayed focussed on Eastern State, as a logical place for a pilot project. We were successful in getting a budget amendment for the set aside of property for Hope Family Village at Eastern State. The wording was odd and referred to DBHDS. I learned that Myra Signer, former Executive Director of NAMI VA, had become second in command at the Department. I asked Sandy to arrange a coffee with Myra, who she was good friends with, in Richmond. It was a very pleasant drive up and back March 2019. Myra congratulated us on being persistent all the way back to the days we would invite NAMI VA to learn about Fairweather Lodge. She followed up with Myra to create contacts inside DBDHS to help us make the project happen.

I remember the drive because it was the highlight of our mutual accomplishment, stemming back to our first meeting at the NAMI Virginia Conference almost four years earlier. It had been a long time. You could call it a celebration at having arrived – finally a connection to DBDHS and some respect for our persistence.

Sandy was able to secure two NAMI VA presentations for us. The first (June 2018) was difficult because the time kept being shortened. She had to fight for us 40 minutes.

The NAMI VA Conference in 2019 was the first in several years. Sandy, once again, used her board influence to get us on the agenda. Finally, before Covid-19 happened, NAMI families from across the state were learning about us. They were amazed and inspired by what Hope Family Village had accomplished. We added to our list of interested families.